Five and a half months ago Somali pirates seized a Taiwanese fishing vessel. On Monday the vessel was released. 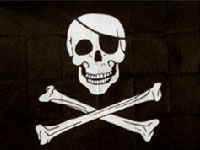 The pirates left the Ching Fong Hwa 168 in skiffs that took them to shore, said Cmdr. Lydia Robertson of the U.S. Fifth Fleet in Bahrain. The ship had two Taiwanese and 12 Chinese crew members on board when it was hijacked 220 kilometers (137 miles) northeast of the Somali capital, Mogadishu in May. One of the crew members was killed the following month by the pirates.

Cmdr. Robertson said the ship had been escorted by a U.S. navy vessel out of Somali waters. On Sunday, two other ships that had been hijacked in May by Somali pirates were freed after U.S. naval personnel spoke to them by radio.

"We encourage pirates to leave the ships," said Cmdr. Robertson. "We tell them, you get in the skiff, you leave, you do not take any hostages."

She offered no further details on the conversations, but confirmed that the Navy was in contact with the two remaining ships being held in Somali waters.

Monday's incident marks the fifth time in a week that the American navy has intervened to help ships hijacked by Somali pirates. Last week, sailors boarded a North Korean ship to treat crew members who overpowered their hijackers, and a U.S. naval vessel fired on pirate skiffs tied to a Japanese-owned ship.

Somalia has not had a functioning government since 1991, when rival warlords overthrew dictator Mohamed Siad Barre and then turned on each other. The government of the chaotic Horn of Africa nation struggles to assert its authority beyond the capital and its lawless coastlines are a haven for heavily armed pirates.