Florida's Supreme Court resolved that the state's lethal injection procedures are not cruel and unusual. This decision could clear the way for an execution scheduled for this month. 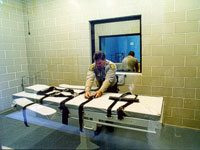 The justices wrote that "we reject the conclusion that lethal injection as applied in Florida is unconstitutional." The decision was unanimous.

Lethal injection procedures are under review by the U.S. Supreme Court. The high court has allowed only one execution to be carried out since it agreed in September to hear a case from Kentucky that raises a similar challenge.

The state Supreme Court ruled that Florida's lethal injection procedure does not violate the constitutional ban on cruel and unusual punishment, particularly since safeguards were put in place a December execution.

In that execution, it took 34 minutes - twice as long as usual - for Puerto Rican-born convicted killer Angel Diaz to die.

Mark Dean Schwab, one of two inmates who have sued over the way Florida administers lethal injections to condemned prisoners, is scheduled to be executed on Nov. 15. He was convicted in the rape and murder of 11-year-old Junny Rios-Martinez.