Former South Africa batsman Jacques Rudolph has prolonged his contract at Yorkshire until 2011. 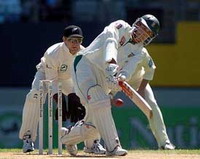 The two-year extension will keep him at Yorkshire until the end of 2011, and a player must have been a resident in England for four years to qualify for the country's national team.

"When he signed his first contract with us, he said he had no intentions of signing a contract to play for South Africa again," Yorkshire chief executive Stewart Regan said Friday. "He's said that on a number of occasions but now he's putting his money where his mouth is ... The longer deal allows Jacques the potential opportunity to qualify for, and go on to represent, England in the future."

The left-handed batsman joined Yorkshire in April, with the England and Wales Cricket Board only "reluctantly" agreeing to register him under the Kolpak ruling which allows a foreigner to sign a contract as a domestic player.

The ECB wants players signed under the Kolpak ruling to have not played cricket for their home country in the last 12 months, but Rudolph last featured for South Africa in August 2006.

He had to sign a declaration saying he didn't intend to play international cricket for South Africa in the future.

The 26-year-old Rudolph scored 2,028 runs in 35 tests and hit five centuries, including an unbeaten 222 on his debut against Bangladesh in 2003.