Gianluca Melegati, Italy rugby team doctor, did not report a player's positive test for cannabis and cocaine. He was questioned over this allegations Tuesday. 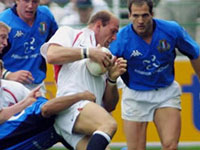 Melegati appeared before Italian Olympic Committee anti-doping prosecutors for allegedly not informing sports authorities that the unidentified Italy player tested positive at a training camp prior to the Rugby World Cup.

Italian news daily La Repubblica reported Oct. 10 that the rugby union player was left out of the squad for the tournament and that the official reason given for his omission was a lack of fitness.

The Italian rugby federation has denied the reports.

Italy was knocked out of the World Cup at the group stage. South Africa beat England 15-6 in the final in Paris on Saturday.

Also Tuesday, CONI banned rugby union player Samuele Pace for one month and 24 days for doping, overturning a previous ruling by the federation which had exonerated Pace.

However, Pace can return to play for his team Arix Viadana immediately because he has already served the ban, CONI said in a statement.

Pace tested positive for the steroid betamethasone on May 19, following Viadana's Super 10 final match against Benetton Treviso, which Treviso won 28-24.