David Beckham trained with Galaxy for the fourth time in two weeks Tuesday, but his status for this week's game against New York is uncertain. 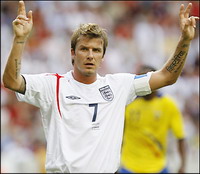 The midfielder performed drills, participated in a scrimmage and stayed afterward with eight teammates to practice shooting.

"He looks great," forward Landon Donovan said. "He gets into tackles. He's sprinting. He's cutting, so he looks good to me. Last week, he was still a little more ginger, I think. He's getting closer but it takes time to build the fitness back and get back into the flow of it again."

Beckham, who injured his knee in the North American SuperLiga final Aug. 29, returned to training Oct. 2. Before injuring his knee, Beckham had been playing on a sprained left ankle since June.

Yallop said he hopes Beckham will be available for Thursday night's game against the Red Bulls but will not force the issue. The Galaxy have won five consecutive games to boost their chances of making the eight-team playoffs in Major League Soccer.

"I've got to talk to him to make sure he's feeling good," Yallop said. "He'd be a pretty valuable substitute if he was available.

"But at this point, it's about winning. Whatever combination of players I put out there has to win a game. It's not about one person; he knows that."

Los Angeles is within four points of Chicago and Kansas City, which are tied for the eighth and final playoff spot, with two games remaining.