Six friends went to a fishing tournament, where they caught an 844-pound (383-kilogram) shark. 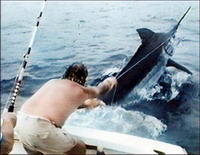 The fight by Adlee Bruner and friends to pull the 11-foot (3.4-meter) mako shark onto the boat from the Gulf of Mexico took more than an hour. But when they made it back to land, it was a record for the decades-old Destin Fishing Rodeo.

"It was tense," Bruner, 47, said about the fight to land the shark, which has a mouthful of huge, fearsome teeth. "I've fished for 40 years. I've never see one that big."

Bruner and his fishing buddies were on a 52-foot (16-meter) charter boat with Capt. Robert Hill, about 70 miles (115 kilometers) southwest of this beach city in the Florida Panhandle.

The fishermen first noticed the big mako because it kept eating grouper and scamp they had hooked.

Hill hooked a two-foot (0.6-meter) amberine on as bait and tossed it out. The shark eventually hit it.

After the long fight, the shark was gaffed and eventually gave up after its tail was roped. But even then, the men could not get the big shark in the boat. They tied it to the stern with three ropes and made the four-hour trip back to land.

The shark was hoisted at the rodeo before a big crowd. It tipped the scale at 844.4 pounds (383 kilograms).

After it was gutted, the mako still weighed 638 pounds (289 kilograms), breaking the tournament's previous shark division record by 338 pounds (153 kilograms).