Celtic to investigate case with fan at Champions League match

Celtic will find out how a fan managed to run onto the field in a Champions League match and make contact with AC Milan goalkeeper Dida. 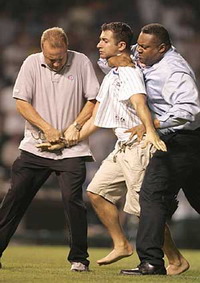 Celtic to investigate case with fan at Champions League match

After Scott McDonald scored the winning goal Wednesday in the 90th minute, a fan ran onto the field and made contact with Dida. The Brazilian turned to chase the fan, but then fell to the ground and was taken off on a stretcher, clutching the right side of his face with an ice pack.

Zeljko Kalac played in goal for the remaining minutes of injury time in Milan's 2-1 loss.

"The fan hit him in the cheek," Milan vice president Adriano Galliani said. "It's tough to say how serious it is."

Neither coach clearly saw the incident.

"I'm like the fourth official, I never see anything at any time," Celtic manager Gordon Strachan said.

"It had nothing to do with the result. I don't know if we will be appealing to UEFA but I think not," Ancelotti.

Galliani said Milan was not going to protest the fan's actions.