American Michelle Perry took her second straight world title in the 100-meter hurdles on Wednesday, fourteen years after a freak accident got her out of soccer. Her gold reinforced the United States atop the medal table. 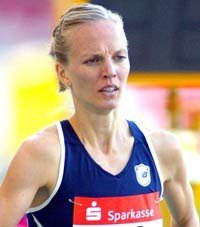 Her eyelashes trembling with concentration before the starter's gun, Perry had to work hard and long for victory, making the difference only after the last hurdle with a desperate lunge at the line.

Her time of 12.46 seconds held off 2003 champion Perdita Felicien of Canada by .03 seconds. In a tight finish, Delloreen Ennis-London of Jamaica was third in 12.50.

It continued her dominating season. Perry is one of three athletes still in the running for the US$1 million Golden League jackpot, rewarding the athletes who remain perfect in the world's six biggest one-day meets.

With the title, the United States moved to four golds and nine medals overall, keeping clear of Russia, which has 3 gold and 8 in total.

At 39, defending champion Franka Dietzsch gave Germany its first gold when she beat Russia's Darya Pishchalnikova and Cuba's Yarelis Barrios in the discus. Dietzsch also won the title in 1999.

One day after winning the long jump, the Russian needed just one attempt of 14.57 meters to qualify for Friday's triple jump final, saving as much energy as she could in the draining heat and humidity.

Campbell won the 100 by three one-thousandths of a second over American Lauryn Williams. She had far less trouble in her heats on Wednesday, happy not to be pushed too hard.