David Beckham and other Los Angeles Galaxy players visited the Toronto Blue Jays before Monday's game against the New York Yankees and got a tour of both clubhouses. 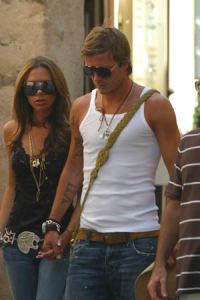 Beckham, who missed his scheduled Major League Soccer debut in a 0-0 draw against Toronto FC on Sunday due to a sore left ankle, walked through the Blue Jays' clubhouse about an hour before game time, signing a few autographs and chatting briefly with outfielder Vernon Wells.

He was joined by a handful of teammates including Joe Cannon, Landon Donovan and Abel Xavier.

From there, Beckham walked across the field as the Yankees finished batting practice, stopping to speak with manager Joe Torre and posing for pictures with bench coach Don Mattingly.

Torre escorted Beckham into the Yankees' clubhouse, where he spoke with Derek Jeter. Beckham even dropped by the umpires' room before returning to the field to pose for pictures while holding a Galaxy jersey.

After donning a Blue Jays jersey with his name and No. 23 on the back, Beckham returned to the field to watch the ceremonial first pitches, thrown by his Canadian teammates Ante Jazic and Kevin Harmse. The Galaxy's Canadian-born coach, Frank Yallop, joined Beckham, Cannon, Donovan and Xavier on the field for the ceremony.

Los Angeles leaves Toronto on Tuesday, part of trip that takes it to D.C. United on Thursday and the New England Revolution on Sunday. The Galaxy return home for a Superliga semifinal against D.C. United on Aug. 15, then play an MLS match three days later at the New York Red Bulls.

Since joining the Galaxy, Beckham has been limited to a 16-minute appearance on July 21 in a friendly against Chelsea. His status for Thursday's game is still unclear.