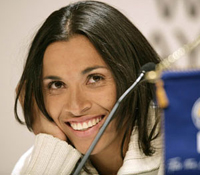 Brazil defeated the United States 5-0 in the women's soccer final at the Pan American Games on Thursday. Cristiane and Marta scored two goals each.

Daniela Alves also added a goal as Brazil completed the tournament without allowing a goal in five matches and outscoring opponents 33-0.

The final was one-sided from the start, with the United States fielding its under-20 team against a seasoned Brazilian squad that won a 2004 Olympics silver medal and a gold at the 2003 Pan Am Games in Santo Domingo. Most of the players on the Brazil team in Rio will be at the Women's World Cup in September in China. None of the U.S. players will be there.

"I've been through a lot, but this is a very special day," said Marta, sobbing at a news conference after the match. "Women's soccer showed the country it should be there on the podium. There are a lot of Martas out there. Let's not stop now."

Marta, women's world player of the year, was the competition's leading scorer with 12 goals.

"This couldn't come at better time. It has marked our lives. It shows women's soccer is getting better every day," said Marta, who became the first woman to leave her footprints in Maracana stadium's Hall of Fame.

She knocked in a penalty in the 19th minute after U.S. striker Kelley O'Hara tripped defender Rosana.

Cristiane made it 2-0 with a header 11 minutes later, and added her second goal early in the second half on a pass from Marta.

Marta was then pulled down in the penalty area in the 56th minute, and scored on a second penalty shot to make it 4-0.

Marta also set up the fifth goal in the 76th, finding midfielder Daniela Alves loose on the left side, who beat U.S. goalkeeper Alyssa Naeher in the far corner.

"This is a dream, and I don't want to wake up from it," Brazil's Rosana said.

The Americans admitted they were overmatched but learned from playing with the gold medalists.

"I wouldn't trade this for anything," said U.S. captain Lauren Cheney. "They are the best team I've played against. It was an honor to be on the same field with them."

Canada, runner-up to Brazil at the 2003 games, won bronze by beating Mexico 2-1 behind goals by Christine Sinclair in the 21st and Kristina Kiss in first-half injury time.

Mexico scored through Teresa Worbis in the 65th.