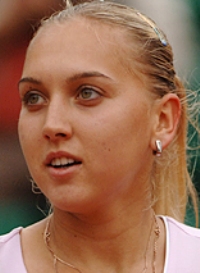 Even without Maria Sharapova and Svetlana Kuznetsova Russia toppled the United States 3-2 Sunday in the semifinals of the Fed Cup.

Russian captain Shamil Tarpischev credited his team's depth, saying he could choose from as many as 15 women and still compete for the Cup. The ones who did the damage Sunday were Nadia Petrova and Elena Vesnina.

But Petrova and Vesnina finished the victory, beating Lisa Raymond and Williams 7-5, 7-6 (7-1).

Williams, fresh from winning Wimbledon last weekend, gave the Americans their other point with a three-set victory over Petrova on Saturday. But Vania King, ranked 84th, lost easily to Petrova.

Tu, ranked 43rd, and King were playing because Venus' sister, Serena, pulled out with an injury last week.

Even without Sharapova and Kuznetsova, Russia replaced them with Chakvetadze and Petrova - ranked eighth and ninth on the WTA Tour - and Vesnina.

In the doubles, Vesnina held serve to give the Russians a 6-5 lead. The pair then broke Raymond when Vesnina slammed a return down the line for a winner and Williams netted a volley.

The Americans took a 4-3 lead in the second set with a break against Vesnina's serve. But the Russians broke back in the next game after three deuces when Vesnina won two points at the net.

In the tiebreaker, Petrova double-faulted on the first point, but the Russians swept the next seven points, including some fine returns by Vesnina off Williams.

"Now she heard about me; now she knows me," Vesnina said, laughing when asked about Williams' comment that she had never heard of Vesnina before the matches.

"It's one of the best moments in my life. I was so nervous before the match. So this match was just unbelievable, just incredible."

The U.S. had beaten Russia four of five times in Cup play, but Russia has won the title twice in three years. The U.S. has not reached the finals since winning for the 17th time in 2000.