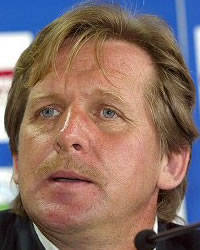 Schuster will take over for Fabio Capello, who was fired on June 28, less than two weeks after leading Madrid to its first Spanish league title in four years and ending the club's longest major trophy drought in 53 years.

The former Germany defender has coached Getafe since 2005. The Madrid-based club lost 1-0 to Sevilla in the Copa del Rey final and finished ninth in the league.

Schuster will be Madrid's eighth coach in four years.

Schuster, 47, is a former star for Madrid, FC Barcelona and Atletico Madrid.

Besides Getafe, Schuster has also coached Spain's Levante - which he led to promotion to the first division in 2004 - Germany's Cologne, Spanish second-division side Xerez, and Ukraine's Shakhtar Donetsk.

Capello's season was overshadowed by problems, particularly his unpopular decision to bench David Beckham after the England midfielder signed a contract with the Los Angeles Galaxy.