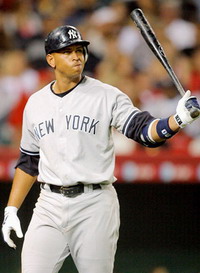 Rodriguez is receiving the highest amount among the $2.13 million (1.6 million EUR) in bonuses earned by players picked for the July 10 game in San Francisco, according to a study of their contract provisions by The Associated Press.

Forty-one of the 62 players picked for the rosters announced on Sunday had All-Star bonus provisions.

Barry Bonds, the only San Francisco Giants player selected for the game, was among those who did not.

Magglio Ordonez and Ivan Rodriguez of Detroit, Carlos Beltran of the New York Mets, Vladimir Guerrero of the Los Angeles Angels, Derrek Lee of the Chicago Cubs and C.C. Sabathia of Cleveland get $100,000 (73,600 EUR) each.

Beltran was on track for earning an additional $100,000 (73,600 EUR) as the top vote-getter in the National League but was overtaken in the final days of balloting by Cincinnati's Ken Griffey Jr., who finished 475,000 votes ahead. Griffey's contract does not contain any bonus provisions.