Serena Williams was more willing to shrug off the unusual ending to her second-round victory at Wimbledon than her father was. 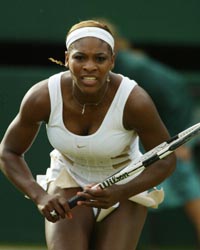 Richard Williams thought chair umpire Sandra de Jenken overstepped her authority on Wednesday by reminding his daughter's opponent, Alicia Molik of Australia, that a questionable call could be challenged under the replay system making its All England Club debut this year.

"There's a lot of strange things that have happened to us," Richard Williams said. "That was horrendous. To be honest with you, it makes you think that that particular referee - not all of them - should be persona non grata."

Here's what happened on the final point of Williams' 7-6 (4), 6-3 win: A linesman ruled that Molik's forehand sailed wide, but apparently neither player heard the ruling. So play continued until Williams hit a forehand volley winner.

When the opponents went to the net to shake hands, de Jenken climbed down from her chair and told Molik she could use the Hawk-Eye call-challenge system. That replay confirmed the original call, and the match ended there.

Later, Williams said: "That was a little weird. I don't know if that's in the handbook to suggest to challenge a call."

Her father was a bit angrier.

"I don't think she (Molik) did it on her own," Richard Williams said. "I thought the umpire encouraged her to do that."

His daughter had some trouble against Molik - but said she wasn't affected by the tight hamstring that bothered her in the first round.

"Not at all," Williams said. "Not today. I was feeling better. Don't jinx me."

Molik, a hard-serving Australian who reached the top 10 in February 2005 before an inner ear infection slowed her progress, took a 4-1 lead in the opening set.

"I was really angry," Williams said of falling behind so quickly. "I thought it was unfair that I got down so far. I was like, OK, it's just one break."

After pulling even, Williams won the final five points of the tiebreaker and screamed, "Come on!" after ending the set with a 121 mph (195 kph) ace. In the second set, Williams trailed by a service break at 2-1, then came back to win five of the next six games.