Singapore police said Monday they are investigating the sudden death of a teenager who collapsed and died after crossing the finishing line in a triathlon race. 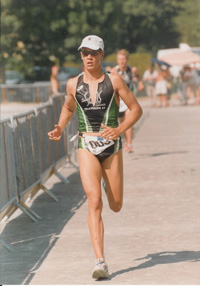 Thaddeus Cheong, a 17-year-old student at Raffles Junior College, passed out and was foaming at the mouth after completing a grueling two hours and nine minutes of swimming, cycling and running on Sunday, the Straits Times newspaper said.

A police spokesman said Cheong was taken to a hospital but doctors failed to resuscitate him and pronounced him dead an hour later.

"Police have classified it as a case of unnatural death. Investigations are ongoing," the spokesman told The Associated Press.

Cheong's family, team mates and friends were shocked by his sudden death, the newspaper said. He was a "very, very good boy" and "every mother's dream," his mom Angeline Cheong told the daily.

Cheong was among 11 participants in the race, a trial to pick two men and two women triathletes to represent Singapore in the year-end Southeast Asia Games. The newspaper said the teen came in third.