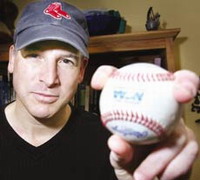 After a valiant effort at translating some of the terms, they gave up - lacing their broadcast with Hebrew-accented versions of ball, strike, out, majors, pitcher and base hit.

Otherwise, the game looked and sounded like real baseball on a minor league level, though it seemed as out of place in the Holy Land as polo in Manhattan.

Wire fences ringed the field, and bleachers were set up along the foul lines. A fast food and snack stand did good business on the sidelines, selling hamburgers, hot dogs, chicken and soft drinks - all kosher, of course. The pitchers were a bit on the wild side, and some of the fielding was sloppy.

"How do you say 'home plate?"' asked one of the announcers on the cable sports channel, which carried the game live. No one came up with an answer.

The Israel Baseball League is the project of Larry Baras, a Boston-based bakery czar who has long dreamed of bringing baseball to Israel. To develop local talent, Baras drafted Dan Duquette, former general manager of the Boston Red Sox, to be the league's director of player development.

"It's a proud day for Israel because this is the first professional game in 5,000 years," Duquette said before the game.

Israel lacks much of the infrastructure needed to support a pro baseball league. The country has three stadiums, and only the one in the Baptist Village is fully set up, organizers said.

Six teams will compete during a 45-game season, with names such as the Bet Shemesh Blue Sox, Tel Aviv Lightning, Raanana Express and Netanya Tigers.

While the league's rosters consist primarily of foreign players - only 20 of the 120 are Israeli, Baras said - organizers hope to develop enough local talent to field an Israeli team in the 2009 World Classic.

They also hope to get Israelis, and not just recent American immigrants, interested in the game.

"We expect Israelis to enjoy it for all the same reasons we do," Duquette said. "To be with family, to enjoy the sound of the bat, to see the ballet actions of the players."

The league's quirky Web site includes pseudo-biblical references to baseball ("And Abner said to Joab, 'Let the young men arise and play before us,"' Samuel II 2:14) as well as a detailed glossary of baseball terms in Hebrew.

The challenge for the league is winning fans in a country where soccer is king and basketball a distant second cousin.

"In my opinion, it's impossible," said Natan Tamari, 23, who came to support his home team from Petah Tikva, a city outside Tel Aviv.

Tamari, who lived in the United States as a child, said the game is too slow and requires too much attention to small details to interest Israelis.

"That's why you hear everyone speaking English around here," he said.

The hapless broadcasters on the sports channel understood the game but were stymied by the terminology. In this first game, at least, they didn't have to deal with a sacrifice fly.