Sammy Sosa's 600th homer resembled so many that came before - except this time the Chicago Cubs were on the other side. 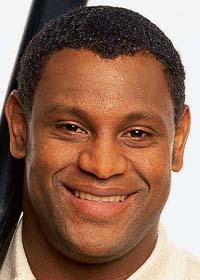 Playing for the Texas Rangers after a year out of baseball, Dominican-born Sosa became the fifth member of the 600-homer club Wednesday when he connected against his former team.

After driving a pitch to right-center for a solo shot in the fifth inning of Texas' victory, Slammin' Sammy bounced out of the batter's box with his trademark hop and thrust his right fist into the air before reaching first base. He was mobbed at home plate by his teammates while the scoreboard showed pictures of all five members of the elite club: Hank Aaron, Barry Bonds, Babe Ruth, Willie Mays and Sosa.

"It was something that cannot be explained," Sosa said. "Getting my 600th against the Chicago Cubs, and my first team (was) the Texas Rangers. It's like everything clicked. My emotions, I don't know what they are."

Sosa played for the Cubs from 1992-2004, winning the '98 National League MVP award and making seven All-Star teams while hitting 545 homers with Chicago.

After one year with Baltimore, Sosa retired at the end of the 2005 season, but after one year returned to sign a minor league contract with Texas - the franchise that gave him his start - before winning a roster spot in spring training.

"People that know baseball know that I was retired for one year and to put everything together and come back, that's big," Sosa said. "That's why tonight, it was a great night."

"I'm showing the whole world I still have a few years left in the tank. I'm hungry every day. I'm here because I want to compete. Everything depends on how I feel a few more years. I feel great. Nothing can stop me right now."

Homer number 600 came off Jason Marquis, the 364th pitcher the 38-year-old Sosa has homered off in his 18 major league seasons.

It was Sosa's 12th homer in 62 games this season. He also has 52 RBIs, which ranks seventh in the American League. He has homered against every major league team in his career.

After going into the dugout with his teammates, Sosa came out for a curtain call. He blew kisses to the crowd and acknowledged the Cubs' dugout with a pump of his fist, and Chicago manager Lou Piniella pointed back toward the slugger. Sosa had never faced the Cubs before the series opener Tuesday night.

A countdown banner that has hung in right field for about a month was flipped from 599 to 600 - and a new banner was unfurled in center field congratulating Sosa for joining the 600-homer club.

The cheering hadn't even subsided before Frank Catalanotto followed with a homer, the 75th of his career, to give the Rangers a 6-1 lead.

While Sosa has had an impressive comeback this season, his pursuit of 600 homers was overshadowed by the Rangers (27-44) having the worst record in baseball and Bonds' chase to catch Aaron atop the career home run list.