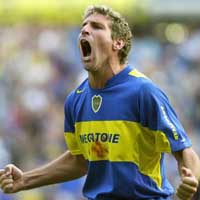 Riquelme, playing his farewell match with the Argentine club, scored with a well-placed shot from outside the area to give the Boca its fourth title in seven years. He added another in the 80th minute on a rebound from a shot by Palacio.

The Argentine club won the first leg 3-0 last week in Buenos Aires and could have clinched the title even if it had lost by two goals.

Needing to score at least three times, Gremio pressed from the start but could not finish its chances. Boca marked well to hold off the Brazilian attack.

With the title, Boca earns the right to play in FIFA's Club World Cup, which also will have European Champions League winner AC Milan. Boca beat Milan in 2003 when the club world title was only contested between the European and South American champions.

Seeking its third title, Gremio needed a historic comeback in front of a crowd of nearly 50,000 - about 3,000 of them Boca supporters - that packed Olimpico stadium in the southern city of Porto Alegre. No team had ever rallied from a three-goal deficit in the 48 Copa Libertadores finals, and only two had come back from two goals down.

It was the fourth time the perennial Buenos Aires power beat a Brazilian team to win the Copa Libertadores. The last time was when Boca defeated Santos in 2003.

Argentine clubs have won eight of the last 11 finals against Brazilian teams, including the last four.

The victory sparked a shower of fireworks over the Argentine capital.

Thousands of Boca fans, waving the blue-and-yellow "xeneize" flags of their seven-time Libertadores champion, massed at the Obelisk stone spire in downtown Buenos Aires. Some uncorked champagne, stopping traffic while others high-fived each other and danced euphorically in the streets at the traditional rallying point for soccer victories.

Midfielder Diego Souza hit the crossbar in the 42nd minute in the team's best opportunity in the first half.

In the second, Gremio's Argentine defender Rolando Schivai hit the post with a header off a free kick in the 50th, and on the rebound Souza's shot from close range was barely saved by Boca Juniors goalkeeper Mauricio Caranta.

After Riquelme's goal, Boca had another opportunity when Schiavi grabbed Palermo in the goal area and Colombian referee Oscar Ruiz whistled a penalty. But Palermo sent the attempt wide left.

The match marked the Boca farewell Riquelme, one of Latin America's top players who is likely to return to European soccer. Riquelme played in Argentina this year on loan after several seasons with Spain's Villarreal.

It also was the last match for Gremio's Lucas, a standout midfielder who is set to move to England's Liverpool.

Gremio, Libertadores champion in 1983 and 1995, entered the match winless in five matches, including Brazilian league games.

The club was trying to match last year's title of city rival Internacional, which won the Libertadores and went on to clinch FIFA's Club World Cup.

Police had feared fan violence after Gremio fans were attacked with rocks by Boca Juniors fans last week in Buenos Aires, but no major incidents were immediately reported near the stadium. A small group of fans from both teams engaged in a confrontation before the match in the stands, but police quickly intervened and halted the altercation.

More than 1,000 police were deployed to work at the match.