Fabio Capello is one step away from repeating his title-winning season with Real Madrid in 1997. 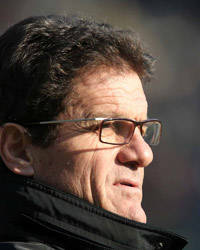 After leading the team to its 30th Spanish league title Sunday with a 3-1 win over Mallorca, the Italian now only needs to get fired from his job - just like he was 10 years ago.

But even if Capello is replaced as coach, the 2007 title will likely go down as one of his greatest achievements.

In a season fraught with problems - most notably his decision to bench David Beckham after the England midfielder signed a contract to leave Spain and head to the Los Angeles Galaxy - Capello reportedly twice offered to quit and came very close to dismissal.

"A major fault of mine this season was not recognizing Beckham's potential," Capello said Sunday.

"I want to stay here. I want to complete my contract. But now the decision rests with the president," Capello said. "He said he would decide after this week."

Capello was described by Calderon as "a born winner" when he became the team's sixth coach in three years last July.

In Italy, Capello won seven league titles with Juventus, AC Milan, and AS Roma, and the 1994 Champions League with Milan.

"To win trophies we have to work hard, be humble and rediscover Real Madrid's spirit," said Capello, who turns 61 on Monday. "I think we have lost that spirit over recent years."

Capello reportedly offered to stand down in October following Madrid's loss to Getafe but was persuaded to stay by Calderon.

Four months later, he was said to have again resigned but changed his mind when Madrid told him he wouldn't receive a payoff. Capello was believed to be irritated that Calderon had advised him to give more playing time to recent Argentine signings Gonzalo Higuain and Fernando Gago.

Several weeks before, Madrid's board had issued the coach with a vote of confidence amid a clamor from fans for his removal after the team slumped to its fourth defeat in six matches.

Madrid's 28-goal tally was its lowest at that stage in 16 seasons, providing supporters annoyed at the recent transfer of Ronaldo to AC Milan with ammunition to fire at Capello.

The Brazil striker also railed against Capello's treatment but had never seemed likely to persuade the coach to hand him the team's lone attacking role from Ruud van Nistelrooy.

More surprising was Capello's decision to drop Beckham for the rest of the season after the midfielder announced he would join the Galaxy the following August.

"He will practice, but he is not going to play," Capello said of Beckham at the time. "I think you can't have the same drive if you are already with another team."

Uncharacteristically, Capello retracted on his decision the following month, and Beckham's return marked a turning point in Madrid's fortunes.

The former England captain responded with a series of standout performances which proved crucial in the team's late title drive.

"We have a different spirit, we are a true team now," Capello said recently.