Robinho green-lighted by FIFA to play in Madrid's title decider

Robinho will play for Real Madrid in its Spanish league title-deciding finale after receiving permission from FIFA, Spanish media reported on Wednesday. 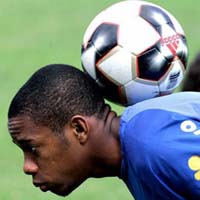 Robinho green-lighted by FIFA to play in Madrid's title decider

The Brazil forward was meant to join the national team on Tuesday in preparation for the Copa America, the South American championship starting on June 26 in Venezuela.

Though clubs are required to release their players 14 days before the start of a major tournament, Madrid will not have to after the Spanish football federation received word from soccer's world governing body allowing Robinho to play against Mallorca on Sunday.

Madrid is tied with FC Barcelona with 73 points. Madrid will clinch its record 30th league title - and first in four years - with a victory since it leads its Catalan rival on head-to-head results.

Brazil gathered in Rio de Janeiro on Tuesday for its June 27 opener against Mexico. Robinho trained with his Madrid teammates on Wednesday.