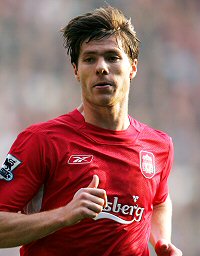 Alonso, a key figure in Liverpool reaching two Champions League finals in three years, signed a contract to keep him in the club through 2012.

Although Liverpool has yet to sign any new players since its season ended with last month's 2-1 Champions League final loss to AC Milan, it now has several of its top players tied to long-term contracts.

"I knew there was interest from other clubs but it was always my idea to stay here," Alonso said. "I have been here for three seasons now and have such special feelings for the club and the supporters."

Alonso scored 12 goals in 134 matches since joining Liverpool in August 2004 from Real Sociedad for 10.5 million pounds (US$20.6 million; EUR15.4 million). He forged an instinctive central midfield partnership with Gerrard, with both players scoring in the 2005 Champions League final win over Milan.