Back from pneumonia, Briggs ready for first title defense

Shannon Briggs is the heavyweight champion of the world. Well, the WBO's version of the champ, and one of four titleholders in what usually is considered boxing's prestige division. 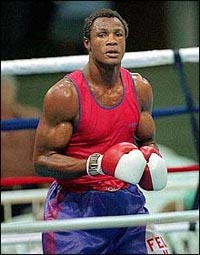 Back from pneumonia, Briggs ready for first title defense

Briggs knows how to end all the uncertainty about which fighter is the best of those champions. He plans to show everyone on Saturday night in Atlantic City, New Jersey, that the main man is none other than himself.

He plans to do it quickly, too, against Sultan Ibragimov of Russia, a 2000 Olympic silver medalist who is unbeaten (20-0-1) as a professional.

"I'm going to take him out," Briggs said during the buildup for his first title defense, at Boardwalk Hall. "What can they tell him about me, that he can punch? He's going to find out.

Ibragimov is no slouch, though. He has 17 knockouts - Briggs has 42 in his 48-4-1 record. While Briggs was recovering from pneumonia in March, forcing postponement of the original date for this bout, the 32-year-old Ibragimov was stopping an overmatched Javier Mora in 46 seconds.

"I am ready for this fight and I am ready to win this title for myself and for my people in Russia," he said. "There has been enough talk already and it is time now to fight."

The 35-year-old Briggs heartily will endorse that concept.

"Winning the WBO championship has been a roller-coaster ride I am going to continue on," Briggs said. "I love it. I am refocused, rededicated. I am an emotional fighter. When I hear the bell, I turn into a beast."

The beast has been on display only twice in the last year, most recently when Briggs knocked out Sergei Liakhovich in the final seconds of the 12th round in Phoenix on Nov. 4. In addition to the pneumonia to forced the delay in the fight with Ibragimov, Briggs has asthma, a condition he's fought with throughout a career in which he hasn't lost since 2002.

"Yeah, I fight with a disease," he said. "I been fighting 20 years with asthma, who can say that?

"This will be a great opportunity to showcase my skills. I've been doing this a long time and had a great career. It's been a great ride and now I'm going to take him out."

Briggs believes by knocking out Ibragimov, he no longer can be ignored by the other heavyweight champions. Eventually, he hopes to unify the titles.

But Ibragimov is no slouch, and if he wins Saturday it would put the entire heavyweight division, regardless of sanctioning body, back in the hands of former Soviet republics.

"This is a very important fight for the people of my country," Ibragimov said. "And for me."