Milan to avoid another penalty shootout 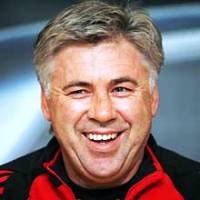 Milan to avoid another penalty shootout

AC Milan won't even consider the possibility of another penalty shootout.

Since beating Juventus on penalties to win its last Champions League title in 2003, Milan has lost three straight shootouts.

In 2003, Juventus got revenge in the Italian Supercup; and Boca Juniors beat Milan in the Intercontinental Cup a few months later. Then came Jerzy Dudek's save on Andriy Shevchenko in the 2005 final in Istanbul, Turkey, giving Liverpool an amazing comeback victory after being down 3-0 at halftime.

Milan meets Liverpool again in the final Wednesday in Athens.

Jose Reina has taken over for Dudek in Liverpool's goal. He saved two shots and the Reds converted all five of their penalties in their shootout win over Chelsea in the semifinals.

"We are not thinking about penalties but if it happens, we will have to strike the ball better than we did in Istanbul," Milan coach Carlo Ancelotti.

Ancelotti has another bad shootout memory. He played in the 1984 final in which AS Roma lost to Liverpool on penalties.

While Kaka has converted all three penalties Milan has been awarded in this season's Champions League, the squad has missed three of five in Serie A.

With Shevchenko gone, Kaka is the No. 1 penalty taker. Andrea Pirlo comes next, and Alberto Gilardino and Clarence Seedorf are also capable.

Defender Massimo Oddo converted six of six penalties as Lazio's captain last season, but has been more inconsistent this year.

Of course, there are always more factors when it comes down to selection for a penalty shootout.

Alessandro Nesta cooly fired the first penalty shot of his career past Gianluigi Buffon in the 2003 final, in which Milan goalkeeper Dida stopped three shots.

Dida also stopped a penalty by Francesco Totti in an Italian Cup match this season.

"The past is the past. I always look forward," Kaka said. "We have the opportunity to write our names in the history of the club."

Before the 2003 and 2005 finals, Berlusconi voiced his opposition to Ancelotti's preferred 4-3-2-1 "Christmas tree" formation, suggesting that two strikers play instead of one.

Back then, Berlusconi had the added weight of being the country's premier. The fact that he's now a mere opposition leader hasn't silenced him.

While the "Christmas tree" formation is still in place, the debate now is which striker to put on top - Filippo Inzaghi or Gilardino.

Inzaghi has scored 56 goals in Europe during his career but his skills are declining at 33. Gilardino is in his prime at 24 but has managed just two goals in 18 career Champions League matches.

"If it were up to me to decide, I would put Gilardino in for the first half since his physical strength can stand the impact of Liverpool's defense," Berlusconi said Saturday. "Then I would make space for Inzaghi in the second half, when the opponents will be tired."

It's hard to imagine the two new American owners of Liverpool - George Gillett Jr. and Tom Hicks - making such a suggestion. But Ancelotti has grown accustomed to Berlusconi's recommendations.

"Berlusconi's suggestion? It's just a hypothesis, nothing more. I don't have to decide on the lineup until 7:00 on Wednesday evening," Ancelotti said. "Inzaghi has always done well as a starter."

Fortunately for Ancelotti, Berlusconi usually reserves his tactical suggestions only for Milan's attack.

In defense, Ancelotti seems inclined to start Oddo ahead of Cafu at right back, and captain Paolo Maldini is likely to start alongside Nesta in central defense despite recurring knee problems.

Kakhabar Kaladze or Daniele Bonera could step in if Maldini doesn't play, while Marek Jankulovski seems a certainty at left back.

Gennaro Gattuso, Pirlo and Massimo Ambrosini will hold down the midfield and Seedorf and Kaka will be positioned behind Inzaghi or Gilardino.