Chelsea soccer manager in the doghouse after canine controversy

Jose Mourinho, the charismatic and pugnacious coach of England's Chelsea Football Club, was arrested after allegedly resisting police officers investigating whether his pet dog was an illegal alien. 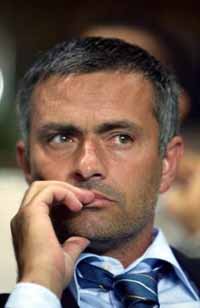 Chelsea soccer manager in the doghouse after canine controversy

The Portuguese manager, never far from controversy or British newspaper headlines, was reported to have been involved in an incident with police who wanted to take away his Yorkshire terrier and put the dog in quarantine on grounds that it had been taken out of Britain and brought back without the required inoculations.

The Sun newspaper reported that Mourinho, 44, rushed home from Chelsea's Player of the Year awards in London on Tuesday evening, refusing to let police take the dog and getting into an argument with officers. He was taken to a west London police station and given a caution for obstructing officers. No charges were filed.

A spokesman for Mourinho said on Wednesday the incident was a misunderstanding.

He said: "Jose Mourinho can confirm that he was cautioned by police, and released without charge earlier this morning after an incident involving his pet dog. The incident occurred due to a misunderstanding over documents required for veterinary regulations.

"Mr Mourinho would like to make it clear that his pet dog was bought in England from a reputable breeder and has had all its necessary inoculations. Full cooperation will be given to the authorities over any animal health issues," said the spokesman.

Mourinho was directing Chelsea's training on Wednesday as the team prepares for Saturday's F.A. Cup final against top rivals Manchester United. His outspoken criticism of opposing players, coaches, referees and officials has made him one of the most criticized characters in English soccer. His fashion sense has also made him a prominent figure.

Police had gone to Mourinho's home in central London on Tuesday evening with an officer from the Animal Health and Welfare Service.

Scotland Yard said the dog was to be seized under the Animal Health Act of 1981 and the Rabies Order of 1974.

The Sun reported Mourinho's wife Tami telephoned to tell him the dog was being taken away. He returned home and took the dog away from police. The dog is still missing, the Sun said.

A spokesman for Westminster council said animal control officers were looking for the small dog. He said the council had a good record of tracking down pets: in July 2005, it found actress Liz Hurley's dog, Emily, after the Labrador went missing.

The dog will be handed to London's Metropolitan Police if it is found, the spokesman said.

Mourinho left his home Wednesday morning without making any comment to waiting reporters.