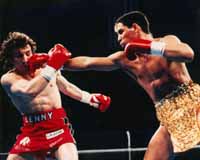 Camacho faces up to seven years in prison and a fine of up to $10,000 (EURO7,350). Circuit Judge Steve Simpson delayed sentencing, but ordered him sent straight to jail because a bail bond agent said he hadn't heard from Camacho for more than two years, the Sun Herald reported on its Web site.

Camacho, who is being held at the Harrison County Adult Detention Center, won super lightweight, lightweight and junior welterweight world titles in the 1980s. His last title bout came against then-welterweight champion Oscar De La Hoya in 1997, a loss by unanimous decision.

A warrant was issued for Camacho on Dec. 22, 2004, for a November burglary of a computer store. He was arrested in January 2005 on the burglary charge, and was also was charged with drug possession after police allegedly found ecstasy in his hotel room at the Imperial Palace. Trial on the drug charge is tentatively set for June.

In a written statement in January 2005, Camacho apologized for the break-in, which caused nearly $13,000 (EURO9,550) in damage and losses at ZDI Computer Center in Gulfport.

Camacho had bought a laptop from the business but had left it there for work on technical problems. He was trying to retrieve his computer, his attorney, David Morrison, said. The break-in was "a momentary lapse in judgment," he added.

Morrison said negotiations had taken place with the business owners, Solomon and Samantha Wheeler, until their attorney made an "outrageous" demand for $500,000 (EURO367,240) to avoid media exposure.

Wayne Woodall, the Wheelers' attorney, claims Camacho fell through the ceiling, cut himself, urinated inside the office and left with seven laptops and about $5,600 (EURO4,115) in checks and cash.

Camacho has had several brushes with the law involving drugs, his driving habits, and domestic assault. When he was 16, he served 3 1/2 months in prison in the state of New York for auto theft.