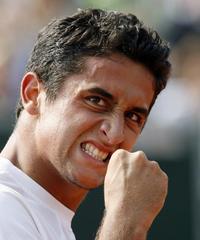 Nicolas Almagro beat his opponent Tim Henman 7-5, 6-1 Monday at the Rome Masters. He will set up a second-round match with top-ranked Roger Federer.

Almagro, who won his second straight Valencia Open title three weeks ago, served 12 aces, including one on his second match point.

The top eight seeded players have byes, but Federer was in action later Monday when he renewed his rivalry with Rafael Nadal in a first-round doubles match.

There is only one previous meeting between Federer and Nadal in doubles. In 2004, Nadal and Tommy Robredo beat Federer and Yves Allegro in Indian Wells, California.

A year ago, Nadal beat Federer in a fifth-set tiebreaker to win the singles title here. Both players called the match the best of the year.

Nadal also beat Federer in the Monte Carlo Masters final last month and holds a 7-3 career edge overall in singles. Nadal has won all five of their singles matches on clay.

This is Federer's 171st consecutive week at No. 1 in singles, passing John McEnroe for fourth place on the all-time list of time at No. 1. Pete Sampras holds the record at 286 weeks, followed by Ivan Lendl with 270 and Jimmy Connors with 268.

The Rome tournament is an important clay-court tuneup for the French Open, which begins May 27.