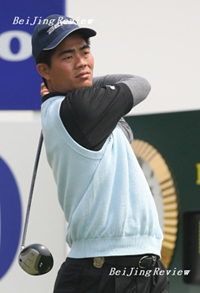 Zhang, a five-time winner on the Asian Tour and long considered the trailblazer for Chinese golf, was US$672 (EURO 494) short of joining the million-dollar club, the tour said. He can reach the six-figure mark by making the cut at next week's Macau Open, an event he has won twice.

Liang is the 12th player to surpass the million-dollar mark on the Asian Tour, with Thailand's Thongchai Jaidee leading the career money list with US$2.4 million (EURO 1.76 million).

Liang said his next aim was to win the Asian order of merit title. He is in second place behind South African Anton Haig after 13 of 29 tournaments in 2007.

"I am hoping to challenge for the Order of Merit title - I would like to win this award," he said.