After three months of verbal sparring, Floyd Mayweather Jr. and Oscar De La Hoya are just about ready to shut up and fight. 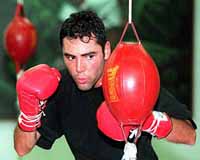 Mayweather, boxing's best pound-for-pound fighter and De La Hoya, its most popular champion, said little to spark controversy or antagonize each other on Wednesday at the largest media gathering before their fight for De La Hoya's WBC 154 pound (70-kilogram) title on Saturday.

"I think I'm out of words," De La Hoya said at the MGM Grand Hotel and Casino. "There really isn't much more to say. There's only one thing left to talk about, and that's the result."

That hasn't been the case during the colorful buildup to fight week. The innovative promotions for boxing's most anticipated fight in a half-decade included a widely praised HBO reality show, popular videos distributed on YouTube, and an all-out blitz on every other media format.

After Mayweather (37-0, 24 KOs) taunted and threatened De La Hoya - and hung a replica of the Golden Boy's Olympic gold medal around a chicken's neck - during their 11-city promotional tour, the fighters' Las Vegas extravaganza was decidedly muted. Mayweather said only a few words on the dais, and De La Hoya (38-4, 30 KOs) was equally brief.

"Don't miss this one. It might not be too long," Roach said.

Though Mayweather claims to see fear in De La Hoya's eyes, both fighters seemed calm and comfortable. Those feelings could be due to their eight-figure paydays for what could end up being the most lucrative fight in boxing history.

Richard Schaefer, the chief executive of De La Hoya's Golden Boy Promotions, said the MGM Grand Garden Arena already has sold each of its 16,200 seats, and six casinos on the Las Vegas Strip already have combined to sell 15,700 seats at closed-circuit viewing parties for the mass of boxing fans heading to town this weekend.

Though both fighters seemed mellow, both realize a portion of their legacies hang on the outcome. Both have intimated it might be their last fights, though Mayweather said he would be open to a rematch depending on the outcome.