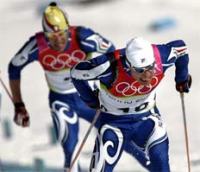 "I'm not aware of anything," federation sports director Markus Gandler told The Associated Press in a telephone interview after testifying before an International Olympic Committee disciplinary commission in Lausanne, Switzerland.

Last week, the IOC executive board banned six Austrian cross-country and biathlon athletes from the Olympics for life for involvement in blood-doping violations at the Turin Games.

Gandler, noting that he could not speak for the retired Perner and Rottmann, said he told the panel that the athletes implicated in the scandal were willing to provide DNA samples. But the panel didn't seem interested in this, he said.

Gandler said that during the course of his roughly 3 1/2-hour hearing, he "chronologically" recounted all that had happened in Turin.

"I told them everything I knew, but I'm not sure it will be enough," Gandler said.

The Austria Press Agency reported that Gandler didn't get the impression the commission believed him when he said he didn't notice anything in Turin.