Another cyclist was summoned to the Italian Olympic Committee hearing for alleged involvement in a Spanish blood-doping scandal. 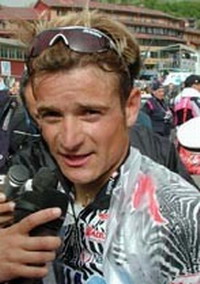 Michele Scarponi, who rides for the Acqua & Sapone team, will appear before CONI's doping commission Wednesday on charges of having used or attempted to use a banned substance or method.

Giro d'Italia champion Ivan Basso will have a similar hearing the same day. The Discovery Channel rider has denied doping.

Scarponi has allegedly been linked to Operation Puerto, a Spanish probe started last May when sports doctor Eufemiano Fuentes, coach Manolo Saiz and six other people were arrested in Madrid on suspicion of providing doping services to cyclists.

The investigation implicated more than 50 cyclists and led to pre-race favorites Jan Ullrich and Basso and seven others riders being excluded from last year's Tour de France. The allegations also forced two teams to dissolve when their sponsors backed out.

Acqua & Sapone director Palmiro Masciarelli said he knew that Scarponi was connected to the case before hiring him this season, and that he checked with CONI before giving the rider a license.

"A month ago, CONI said there was no problem. And as far as we're concerned there is still no problem," Masciarelli said. "He told me again that he's clean and said he's willing to undergo any sort of DNA test to show it."

Masciarelli said Scarponi has not been suspended.

The 27-year-old Scarponi has two victories this season - one stage and the final classification in the weeklong Coppi-Bartali race last month. He currently stands second in the Giro del Trentino overall standings.