Mike Tyson, coming to India, demands own hotel floor - and no spicy food

Mike Tyson's biggest days of fame may be behind him, but when the former boxing champ comes to India to promote a Bollywood film, he is demanding to be treated like the heavyweight celebrity he once was. 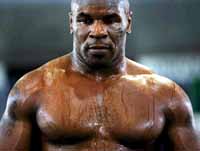 Mike Tyson, coming to India, demands own hotel floor - and no spicy food

Among his conditions for the visit: no media; no spicy Indian food; and not one other person staying on the same floor of his hotel.

Such behavior may not be unheard-of among American celebrities. But for Bollywood, it's a whole new level of prima donna.

"I am working with an international celebrity for the first time and I have realized it's not too easy to coordinate with them because they are more organized and want everything sealed and delivered," the Times of India newspaper quoted film director Ahmed Khan as saying.

Tyson, whose career was marred by a rape conviction and allegations of drug abuse, has signed on to dance to Indian pop music in a promotional video for the Bollywood comedy "Fool n Final," which Khan will direct.

Tyson is due to arrive in India next month for the shoot.

"When we signed him for the film, we didn't realize it would be so difficult to organize security for him," Khan said in the newspaper. "Whenever he steps out of America, he wants to be very sure of the (arrangements)."

However, getting Tyson non-spicy food shouldn't be too difficult. He's bringing his own chef.

And keeping the Indian media at bay won't likely be too much of a problem - boxing isn't big in the country, and very few Indians would recognize Tyson.

But securing an entire hotel floor is a pricey proposition these days in India, where a single room in a five-star hotel can cost US$300 to US$500 (EUR220 to EUR370). Hotels are chronically overbooked, and it's sometimes hard to get even one room without booking weeks or months in advance.

Tyson's legal troubles are also a consideration. He faces an August trial in the U.S. on felony drug possession charges, and two misdemeanor counts of driving under the influence of drugs.

"He has many legal cases pending still, so if anything happens to him in India, the U.S. government will be answerable to the courts there," Khan said.

As for the Bollywood film promotional ad, Khan said he has a plan for Tyson.

"We'll ask him to do a little jig with the male actors in the film," he said.