Former heavyweight champion Tommy Morrison, who retired 11 years ago after a positive HIV test, has applied for a boxing license in Texas. 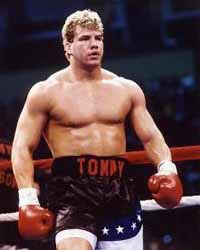 Morrison is scheduled to fight Dale Ortiz on Friday, television station KRIV in Houston reported. His license is pending with the state, officials said.

Morrison, who said he has no trace of the AIDS virus after taking several HIV tests, won his first fight since coming out of retirement with a second-round knockout of John Castle in January in West Virginia.

Morrison won the WBO title in 1993 by outpointing George Foreman. He lost it later that year. Morrison, who was featured in the movie "Rocky V," also served a couple of years in an Arkansas prison on drug and weapons charges.