Vania King, who replaced an injured Serena Williams on Sunday, won her reverse singles to clinch the United States victory over Belgium and send it to the Fed Cup semifinals. 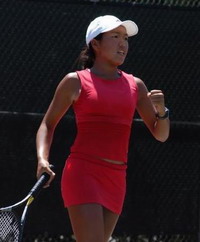 The 18-year-old King, who won raves for her rendition of the U.S. national anthem before the first match Saturday, beat Kirsten Flipkens 4-6, 6-4, 7-5 to give the United States an insurmountable 3-0 lead.

Serena Williams pulled out an hour before she was to face Flipkens, citing slight inflammation in the right knee. A team spokesman said the move was precautionary, and the inflammation wasn't related to the groin injury Williams sustained April 10, when she retired from a match in Charleston, South Carolina.

The Americans will play Russia in the semifinals on July 14-15 at a U.S. site to be determined. Russia advanced by beating Spain 5-0. France and Italy also won 5-0 and will meet in the other semifinal.

King is a trained soprano and also the lone teenage American woman ranked in the top 100. She looked fitter at the finish against Flipkens, who repeatedly required leg massages during changeovers in the final set.

A disputed call went against the Belgian when she was serving for the match at 5-4, and on the next point she lost the game. In the final game Flipkens double-faulted and committed three unforced, and King whacked a forehand passing shot for a winner on the second match point.

That earned the teen a hug from U.S. captain Zina Garrison, and the team began a flag-waving celebration.

Belgium was without its top players, top-ranked Justine Henin and No. 4 Kim Clijsters, who decided to take the week off.