Around 600 Feyenoord supporters ran amok and nine were arrested for committing "violent acts in public" after their team's embarrassing 4-0 loss in Rotterdam to visiting FC Groningen, police said Monday. 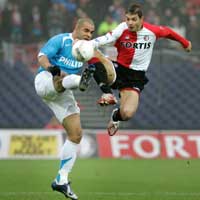 "It was restless for a short period of time after the game," police said in a statement. "Riot police carried out several charges ... (but) there were no physical confrontations between supporters of the rival teams and no one was hurt."

The supporters who were arrested were among a group throwing rocks at police. The statement said further arrests were expected as videotapes had been made of the incident.

Feyenoord, which was thrown out of the UEFA Cup after the club's fans rioted at a game in Nancy, France, in November, is now in fifth place in the Dutch league behind PSV, AZ Alkmaar, Ajax and FC Twente.

"We're not even sure of fifth place (and a spot in Dutch league playoffs), and that's not surprising, given today's performance," said coach Erwin Koeman.

Groningen's Goran Lovre and Koen van der Laak each scored two goals in a 20-minute period near the start of the second half in Sunday's match.

The club was not immediately available for comment on its latest bout of supporter troubles.