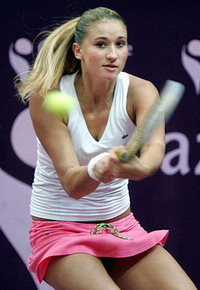 Golovin was appearing in her fourth championship but had been runner-up in each of the three previous finals. This time, there was no denying the French teenager.

Golovin answered nearly all of the top-seeded Petrova's booming but erratic serves and most of her blistering groundstrokes. But her best tactic was to wait until the defending champion made one of her 27 unforced errors.

"I forced myself to be aggressive and stay aggressive and use my forehand," Golovin said. "That kind of put pressure on her. She probably felt she needed to go for the big shots and that's where her mistakes came from."

Petrova was seeking her first successful title defense. She rolled through her first four matches in the tournament without losing a set and declared the green clay at Amelia Island among her favorite surfaces to play on.

But she was broken in her first two serves and again in her fourth serve. All four points she lost in the latter break came on unforced errors.

"What I can say is that it is just a lack of concentration. In some situations I was going for too much in trying to finish it off," Petrova said. "I didn't have enough energy really to stick in the balls today. I didn't have quite the desire either, especially after I lost the fist set."

The second set wasn't any better for the defending champion. She lost her serve three times. She saved triple match point with a backhanded winner, but when her forehand was ruled out down the sideline, Golovin threw up her hands in celebration, ready to accept her trophy and first-place check of $95,500 (71,420.92 EUR).

"The experience of beating Venus (Williams) and Ana (Ivanovic) this week, especially Ivanovic since I had never beaten her in the past, it gives you confidence," Golovin said. "Today I knew that I could beat Petrova. I knew I had the weapons to do so."

Petrova wasn't slated to play next week at the Family Circle Cup in Charleston, South Carolina. She said it could be time to for her take a rest.

"I was a bit surprised that I was tired," Petrova said. "I felt good in the warmup but then on the court I felt the fatigue starting to kick in. Maybe it's not only the physical tiredness, I feel mentally tired too. It might be time to take a break and take a couple days off."