Andy Roddick leaned back in his chair, drink in hand, cheering on U.S. team. 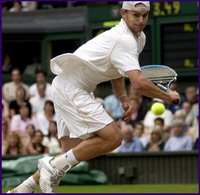 With the United States assured a spot in the Davis Cup semifinals, Roddick rested his sore left hamstring on a stress-free Sunday. But he remained a cheerleader for a competition he desperately wants to win.

This was a day for lighthearted tennis. Robredo joked with Spanish captain Emilio Sanchez that he'd play hard if Sanchez would do 10 push-ups. The captain did them - on the court - after the match.

Roddick already was looking toward the September matchup with Sweden, which closed out a 4-1 win over Argentina on Sunday. While many top players shy away from the Davis Cup, Roddick is intent on giving the U.S. its first title since 1995.

"I want to be here," he said. "I don't think Davis Cup is something that you can play at your convenience."

In the other semifinal, defending champion Russia will play Germany. Russia, with a decisive victory by Marat Safin, downed France 3-2 in its quarterfinal. Germany, guaranteed of advancing, lost two singles matches and defeated Belgium 3-2.

Roddick's Davis Cup commitment may be crucial to ending the longest title drought for the Americans. Spain's chances were weakened when Rafael Nadal pulled out last week, citing a sore foot but likely more concerned with the upcoming clay-court season. Spain reached the quarters after beating Switzerland, which was without Roger Federer.

But Roddick, ranked No. 3, has played in 12 consecutive Davis Cup events for the U.S. And barring injury he'll be in Sweden on Sept. 21-23.

"I feel that you start at the beginning of the year and you decide whether you're going to go through the long haul of it or not," Roddick said. "If it might be difficult or you're not playing in your comfort zone, then all of a sudden you don't want to play. I don't necessarily understand that or agree with it."

Roddick, who was injured March 28 at the Sony Ericsson Open, acknowledged he wasn't 100 percent when he beat Fernando Verdasco on Friday to give the U.S. a 2-0 lead on the fast, hard court that suits his big serve. Roddick is 23-9 in the Davis Cup since his debut in 2001.

"It would certainly take a lot of starch out of our team if Andy didn't play, that's for sure. But luckily that hasn't happened," U.S. captain Patrick McEnroe said. "Andy's been 100 percent committed. I think we, meaning the U.S. fans, have been lucky that that's the case."

Blake, who had lost six of his past nine matches coming into the weekend, looked dominant in beating Robredo and Lopez in straight sets. And the U.S. has had a near lock in the doubles, with Mike and Bob Bryan 11-1 in Davis Cup.

But the key for the U.S. may rest on what surface Sweden picks for the semifinal. The U.S. was ousted from the Davis Cup on clay in four of the past five years. Sweden cruised past Argentina behind singles players Thomas Johansson and Robin Soderling on carpet, and both players like fast surfaces.

"You go there, they will put you in one of these surfaces that no one knows," Sanchez said. "Maybe they play on a much faster surface than here. Maybe they choose clay because they can also play on clay. Mats Wilander is the captain, so you have to be careful."

McEnroe feels the U.S. has a shot no matter the surface.

"These guys are dedicated and really into it. I think we've got a great chance," McEnroe said. "We've got to go over there and hope after the (U.S.) Open we're all good and we're ready to take it to them in Sweden."

If the U.S. reaches the final, the Americans would play at home if it's against Russia, and on the road if Germany advances. Roddick would be there for that, too.

The three days of loud, sellout crowds led Bob Bryan to urge the U.S. Tennis Association to put the final in Winston-Salem if the U.S. hosts, although a larger arena may be needed.

At Goteborg, Sweden, the Swedes completed their victory after clinching a semifinal berth Saturday. Jonas Bjorkman of Sweden beat Sebastian Prieto 6-1, 6-2, and Juan Martin del Potro of Argentina defeated Robert Lindstedt 7-6 (7), 6-4. Sweden has won the Davis Cup seven times - twice against the U.S. (1984, 1997) - but had not reached the semis since 2001.