Champions to contest in Germany 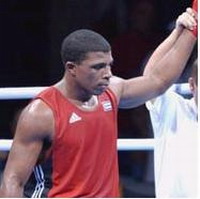 Champions to contest in Germany

The Olympic boxing champions defected from Cuba last month and are going to make their professional debut debut in April.

The trio of gold medalists from the 2004 Athens Games left their hotel while training in Venezuela for the upcoming Pan American Games and then obtained U.S. visas after passing into Colombia.

Each fighter has signed a three-year contract worth at least $1 million (760,000 EUR) with the Hamburg-based company.