Diego Maradona's health continues to improve while he undergoes treatment  for a type of acute hepatitism related to alcohol abuse. 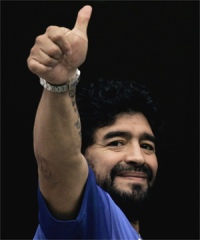 "He is showing a clear improvement," said Hector Pezzella, director of the Guemes Sanatorium, in a statement also signed by Maradona's personal physician, Alfredo Cahe.

The 47-year-old Maradona was taken by ambulance last Wednesday to the Buenos Aires clinic, where he was being treated for withdrawal symptoms. Cahe expected him to be hospitalized for at least 15 days.

Maradona's life was not reported in danger, and doctors say his latest health problems are not as serious as in 2000 and 2004, when he was hospitalized near death for problems associated with cocaine addiction.

Revered in Argentina, Maradona led his country to the 1986 World Cup title and the final in 1990. But he later struggled with drug addiction and obesity, and in 2005 had gastric bypass surgery.