World Cup veteran Ze Roberto earned praises all around after scoring "one of the greatest goals" in his career and leading Santos to a convincing victory over Gimnasia y Esgrima in the Copa Libertadores. 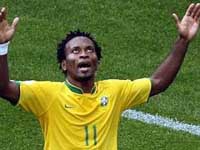 Ze Roberto closed the scoring in Santos' 3-0 win over Argentina's Gimnasia on Wednesday, a result that left the two-time Copa Libertadores champion atop Group 8 with nine points from three matches.

Uruguay's Defensor Sporting and Gimnasia have three points each, while Colombia's Deportivo Pasto is last with zero points. Deportivo would host Defensor on Thursday to complete the first half of the group's schedule. Two teams from each of the eight groups advance.

Ze Roberto, Brazil's starting midfielder in last year's World Cup in Germany, netted his goal at Vila Belmiro stadium in Santos with a neat lob shot over Gimnasia's goalkeeper in the 70th minute.

He went streaking past a defender up the left side, swerved into the penalty area and chipped a high shot across the goalmouth as Carlos Kletnicki left the net.

"The goalkeeper closed in fast and I had to decide whether to shoot hard and low or above him," Ze Roberto said. "I was surprised it went straight in, without even touching the ground. It was one of the greatest goals in my career."

Ze Roberto also set up Santos' second goal in the 51st, dribbling past a defender inside the area and finding midfielder Cleber Santana for an easy strike. He later earned a penalty kick that was missed by midfielder Rodrigo Tabata.

"He is a skillful and talented player," Santos coach Vanderlei Luxemburgo said. "In one play he can decide the game, like he did."

Santos' other goal was scored in the fifth minute after striker Marcos Aurelio's shot was deflected into the net by Gimnasia defender Santiago Gentiletti, reports AP.

"The victory was fundamental to keep us on track to finish the group stage in the lead," Luxemburgo said. "The first-place team will have home-field advantage in the next round and that's our goal."

Santos, which won back-to-back Copa Libertadores titles with Pele in 1962 and 1963, will play its next match against Gimnasia on March 22 in Argentina.