Sri Lanka captain Mahela Jayawardene won the toss and sent New Zealand in to bat Friday in their World Cup warmup match at the 3Ws Oval. 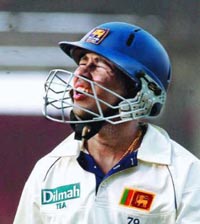 Sri Lanka had a win over Scotland earlier in the week and is emerging as a stronger contender to win the World Cup, which starts next Tuesday and runs until April 28.

Daniel Vettori, the left-arm spinner, was rested for New Zealand in a bid to give Jeetan Patel more experience as the frontline spinner. Fast bowler Mark Gillespie is still recovering from a virus which is affecting the nerves in his shoulder and spine.

In the warmups, teams are allowed to use 13 players, although only 11 can bat, reports AP.

New Zealand lost by two wickets in an upset to Bangladesh earlier in the week, its first international outing since a 3-0 series sweep of World Cup champion Australia at home last month.