Real Madrid has reportedly called David Beckham into its squad for the first time in a month. 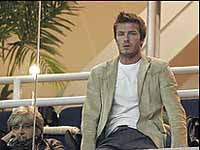 His selection for Saturday's match against Real Sociedad would represent a reversal by coach Fabio Capello, who said the former England captain would never again play for the team after his announcement last month that he would leave for the Los Angeles Galaxy when his contract expires.

Spanish National Radio said Beckham was included in a 20-man squad. Madrid said it was yet to announce the lineup, reports AP.

Beckham was last picked for Madrid as a substitute in the 2-0 loss at Deportivo La Coruna on Jan. 7.

Since then, Capello said Beckham would train with the team but never play again.

Beckham has signed a five-year deal with the Galaxy, reportedly worth more than US$250 million (UER193 million). Madrid had offered the former England captain a two-year extension to his current contract, which runs until the end of June.