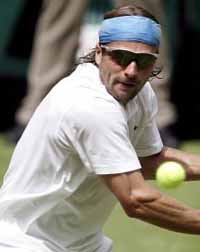 "I think that these are the guys who have the most chance of picking up the points against Romania," Forget said.

Gasquet is France's highest ranked player at No. 16, while Clement is 38th. However, Grosjean seems likely to join Gasquet in singles, reports AP.

"From what I saw in Australia (at the Australian Open), Richard and Sebastien gave me the impression they were the most consistent and strongest in singles," Forget said.

That probably leaves Clement and Llodra to play doubles for France, the 2001 Davis Cup champions.