World Cup winners Italy and European champions FC Barcelona dominated the 2006 team of the year in an online poll on UEFA's Web site. 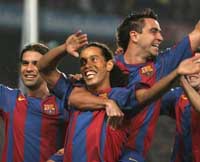 Italy captain Fabio Cannavaro, the 2006 FIFA World Player of the Year, was named Friday along with goalkeeper Gianluigi Buffon, selected for the third time, and defender Gianluca Zambrotta.

Zambrotta was also one of four players selected from Barcelona. Ronaldinho made the team for the third straight year, while defender Carles Puyol was also included for a third time and striker Samuel Eto'o made his second straight team. Barcelona's Frank Rijkaard was chosen as coach, reports AP.

Zinedine Zidane, who was sent off in the World Cup final for head-butting Italy defender Marco Materazzi, was not chosen despite finishing second to Cannavaro in the world player of the year award.

UEFA started its team of the year poll in 2001.