Jimmy Connors flies to Australia to be with Roddick

Jimmy Connors flew into Melbourne on Friday to be with Andy Roddick when the American took on Russian Marat Safin in a third-round match at the Australian Open. 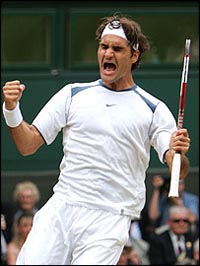 Jimmy Connors flies to Australia to be with Roddick

Connors, who won the 1974 Australian Open and was the losing finalist the following year to Australian John Newcombe, has been coaching Roddick since July of last year.

The 54-year-old Connors had planned to travel with Roddick from the start, but remained in the United States because of the death of his mother and former coach, Gloria. She died Jan. 8 at the age of 82.

Connors, wearing a white shirt and glasses, was sitting in the player's box at Rod Laver Arena as the match started, reports AP.

Jimmy Connors, who won eight Grand Slam singles titles and held the No. 1 ranking for a record 160 consecutive weeks a streak that will be broken by Roger Federer next month had been speaking to Roddick every day by phone.

"It's just a lot more consistent when he's at a tournament," Roddick said. "There's a third dimension to his energy. It's probably a lot better in person than it is on the phone."

Connors did not return to the Australian Open following his loss to Newcombe.