Salihamidzic to join Juventus next season 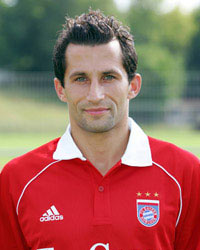 Salihamidzic to join Juventus next season

The 30-year-old Bosnian international has signed a four-year deal with the Turin club, Juventus said Tuesday.

"The club made me a fantastic offer," Salihamidzic said on Bayern's Web site.

Financial details of the deal were not disclosed.