Top-seeded Maria Sharapova avoided a stunning third-set collapse, overcoming the debilitating heat and her own mistakes to beat Camille Pin 6-3, 4-6, 9-7 on Tuesday in the first round of the Australian Open. 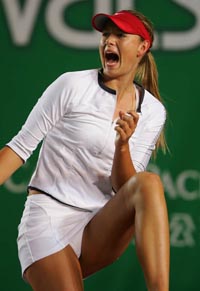 The temperature it hit 38 C (100 F) by mid-afternoon forced tournament officials to suspend new matches on the outside courts for at least four hours.

While that didn't save Sharapova and Pin from almost three hours in the blazing sun, it meant second-ranked Rafael Nadal had the roof closed for the following match on center court, his 7-6 (6), 6-3, 6-2 win over American Robert Kendrick.

Third-seeded Kim Clijsters took advantage of the closed arena, allowing Vasilisa Bardina only two points on her own serve in a 6-0, 6-0 rout.

Sixth-seeded Martina Hingis, a three-time champion here, was almost as ruthless in her 6-0, 6-2 win over 2005 semifinalist Nathalie Dechy on the second show court.

Sharapova, her screeching intensifying as the temperature and the pressure increased, won five straight games to open the third set and appeared ready to finish off her opponent quickly. Then she hit a wall.

"It's inhumanly possible to play three hours in that kind of heat. I don't think our bodies were made to do that."

As Pin ran off five straight games fending off match points in the eighth game to tie it up, Sharapova's shoulders drooped with each error.

She held for 6-5, but appeared ready to be sick at any moment. Sharapova called for the trainer as Pin headed back onto the court, stretching in the shade to stay loose.

Sharapova was barely moving between points, conserving energy. She squandered her third match point as Pin served in the next game.

Then Sharapova was broken again, allowing Pin to serve for the match.

Pin double-faulted on break point to make it 7-7, then Sharapova won the next eight points to end the match.

Did she ever think of retiring?

"No. Definitely not. I'm not a quitter," she said. "I'm not just going to stop because of the heat."

Sharapova has not lost in the first round at a major since her first two Grand Slam tournaments in 2003. She has reached the quarterfinals in nine of the last 11 Slams, including her U.S. Open win in September.

Sharapova, who had trouble with her serve and was broken six times in a blur of 65 unforced errors, said she felt pain in her lower stomach late in the match. Highly irritated, she also yelled an obscenity at chair umpire John Blom after he ordered a point replayed because a second ball dropped on the court behind Pin.

When an announcement followed the match that due to the Extreme Heat Policy, the roof would be closed at Rod Laver Arena, Sharapova raised her hands over her head and clapped. She gave the announcer the thumbs up.

Pin, a Frenchwoman who has only reached the second round twice in 15 majors, unsettled Sharapova with her composure and by relentlessly keeping the ball in play.

"I was so close that I thought it was my day, but apparently it was not, so next time," she said.

Nadal took just more than two hours to beat Kendrick, who forced him to five sets at Wimbledon last year.

This time, Kendrick didn't get a break point against the muscular Spaniard. Nadal got one service break in the second set and two in the third, limiting his errors to 14 against 43 by Kendrick.

Kendrick was throwing everything at Nadal, going for all his shots, lunging and diving all over the court. Kendrick even tossed his racket over the net after an exchange of volleys in the middle of the second set.

The Extreme Heat Policy, which measures conditions by combining the air and court surface temperatures, was invoked halfway through the Sharapova-Pin match.

Current matches were allowed to finish, but no new matches could start on outside courts.

Eighth-seeded David Nalbandian grew stronger in the heat as Janko Tipsarevic wilted, but was critical of the decision to keep some matches going while others were delayed.

Nalbandian, a 2002 Wimbledon finalist, said in the third set he thought: "I was in the plane back home."

"It was very difficult. I was two sets down and 5-2 double break. I wasn't playing very good," Nalbandian said. "He couldn't make it."