David Beckham back in training

David Beckham returned to full training with Real Madrid on Wednesday after a two-week absence due to a left-knee injury. 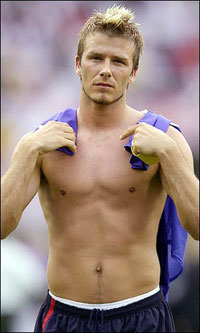 David Beckham back in training

Beckham, who has missed three games due to a swollen meniscus, is now expected to be back in the squad for Sunday's Spanish league game against Athletic Bilbao at Santiago Bernabeu Stadium.

The 31-year-old midfielder has made the starting lineup in just three league games this season and appears likely to be on the substitute's bench again.

Beckham's lack of first-team opportunities has heightened speculation about whether he will extend his four-year contract, which expires in June.

If the former England captain doesn't renew before the end of the year, he will be free to negotiate a move to other clubs.

However, both Beckham and Madrid have indicated they hope to strike a new deal, reports AP.