Inter Milan striker Julio Ricardo Cruz has damaged the medial ligaments in his right knee and is expected to be sidelined for weeks. 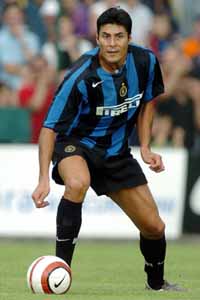 An MRI scan on Tuesday revealed the extent of Cruz's injury, sustained in Inter's 1-0 win over Reggina at the weekend.

Club spokesman Andrea Butti said it was impossible to say when the 33-year-old forward would next play. Media reports suggested two months as the usual timeframe for recovery, reports AP.

Cruz, who has scored six goals this season, will not need surgery, Butti said. He will definitely miss Wednesday's Champions League match against Sporting Lisbon and Sunday's clash with Serie A title rival Palermo.