CSKA Moscow can reach second round with win over Porto

CSKA Moscow can qualify for the second round of the Champions League with a win over FC Porto on Tuesday. 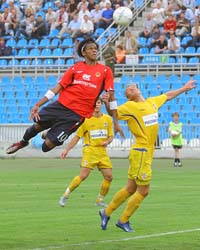 CSKA Moscow can reach second round with win over Porto

The Russian team, which won its second straight Russian league title Saturday, leads Group G with eight points one more than both Porto and Arsenal.

"Victory is our only goal in the match," CSKA coach Valery Gazzayev said.

CSKA, which drew and beat Arsenal in its last two Champions League matches, will also be boosted by the return of captain Sergei Ignashevich, who had been out with an ankle injury.

The Portuguese champions are planning some changes for the match in Moscow, reports AP.

"Don't be surprised if I start rotating players a lot more," Porto coach Jesualdo Ferreira. "We have seven games in the space of a month and we have to spare players when we can."

Left back Jorge Fucile and defensive midfielder Paulo Assuncao stayed on the bench in Saturday's 2-1 win over Academica but are likely to play in Moscow.

Striker Lisandro Lopez and defender Jose Bosingwa went off injured against Academica but are expected to recover in time for Tuesday's match.