Hold off on that retirement party for Irina Slutskaya. 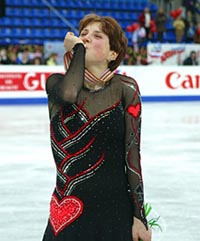 The two-time world champion figure skater says she hasn't retired from competitive skating, dismissing a report from Russia. Though she isn't doing the Grand Prix series this season, Slutskaya said she hasn't ruled anything out, including the Russian nationals in January.

"No, I'm not finished," Slutskaya said by phone Tuesday from Philadelphia, where she was in rehearsals for "Gretchen Wilson's Country on Ice" show. "If I said I'm retiring, I forgot to tell my coach."

As well as her mother and everyone else close to her.

Slutskaya was bombarded with messages after Russia's All Sport news agency quoted her Monday as saying she was quitting and considering becoming a television host.

"It is absolutely certain that I am done with competition, I will no longer take part in competitive skating," the 27-year-old Russian was quoted as saying.

But Slutskaya said it was all news to her.

"I wish to talk with the one journalist who wrote this. Maybe he doesn't like how I skate," she said. "I have no idea.

"Tha's something weird. It's just funny," she added. "I think the people who just don't know me, they see I'm working on TV and they need something, and they're writing `Oh, she's on television now."'

Though Slutskaya hasn't skated in any major competitions since winning the bronze medal at the Turin Olympics, she hasn't been off the ice. She spent most of the spring and summer on tour with "Champions on Ice," and just finished a two-week skating tour in Russia.

She came back to the United States for the "Country on Ice" show Wednesday night, where skaters will perform to songs done by Wilson and her band. Slutskaya is skating to "Redneck Woman" and "9 to 5."

Slutskaya then heads back to Russia, where she will co-host the Russian version of "Skating with Celebrities" with Olympic gold medalist Evgeni Plushenko.

Slutskaya is skipping the Grand Prix series, as are Olympic silver medalist Sasha Cohen and Michelle Kwan. But she hasn't ruled anything else out.

"You know what, I don't want to say no," she said. "I miss the (Grand Prix) series, but if I want to come back, Russian nationals are in January, so I would have time to get ready. I don't think about anything because, right now, I have so much more to do."

After winning the silver medal at the 2002 Games in Salt Lake City, Slutskaya missed most of the 2003-04 season with a heart ailment that doctors said might end her career, reports AP.

But she was back to her old form by the fall of 2004, and was virtually unbeatable for the next two seasons, winning a second world title and record seventh European crown.

"I'm tired of telling people, 'Don't listen to (the rumors), listen to me,"' Slutskaya said.